Today we moved to our new hotel in Tokyo.  For some reason, the fastest way to get to the train is via the airport, so we found ourselves back there again this morning.  Buying tickets seemed initially scary, but the ticket agent had no trouble figuring out which buttons to push. Now I know what it feels like to be illiterate.

The train ride takes about 90 minutes to get from Narita airport to Shinjuku station in Tokyo.  We had plenty of time to look outside because the ride was very smooth and uneventful.  As the time slipped by, the main thing I noticed was that everything was extremely green.  Rice paddies alternated with hills covered with tall trees.  When we passed through towns, the main thing visible from the train were enormous apartment buildings.  Some of them must have contained close to 1000 apartments.

We arrived safely at Shinjuku station and decided to simply wander around.  One of the first things we noticed was that vending machines are everywhere.  They sell a huge variety of drinks and cigarettes, and a few contain more exotic items. 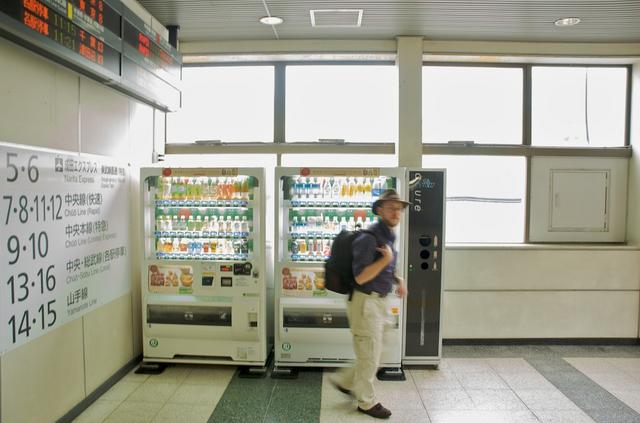 However, everything in them is uniformly tiny: 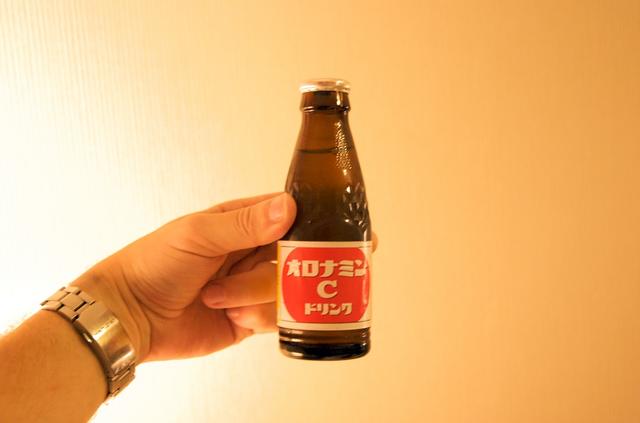 After a couple of hours of wandering around, we walked to the hotel.  Once we got there, we discovered a subway station directly across the street.  If only we could read, we could have saved 15 minutes of walking.  Regardless, they gave us a room.

We rested for a little while, and then went out for a walk to see what we could find.  Being in the middle of Shinjuku, we found a juxtaposition of enormous buildings and flashing lights with the occasional quiet little park or temple.  People were everywhere.  We wandered around fairly aimlessly, then picked a shop and went in for lunch.  Sure enough, they served us food, but I don’t actually know what was in it.  We ordered by pointing at a picture of what we wanted.  Even though I’m not sure what it was, it did taste good.

After lunch, we went back to the hotel to take a nap.  We slept for a couple of hours, then woke up and decided to go see what Shinjuku was like after dark.  Everything was lit up, blinking, and if possible, making noise.  Most of the cars had disappeared, but they were replaced by huge crowds of walkers.  It had seemed moderately crowded before, but now it was packed!  Apparently our hotel is near the “love hotel” area.  We didn’t know this beforehand, but we figured it out after being accosted by no less than five different men offering to set us up to spend a few hours with willing women.  Strangely, they spoke enough English to come tell us what they were selling, but not enough to understand “no” or “not interested”.

By the time we had been walking for an hour, we decided it was time for bed after all.  We headed back to the hotel and collapsed into bed.