We woke up early again today.  After buying some breakfast from the 7-11 (yes, that’s actually the name, and no it’s entirely different from the American ones), we decided it was time to go visit the Imperial Palace.  Just then, my friend Kayo-san called and offered to meet us there. Lucky!  We arranged to meet at Tokyo station, then left the hotel and went to the subway station.

Subway tickets in Tokyo are purchased using some extremely confusing system in which you don’t pick where you want to go.  Instead, you pick how much you want to pay, and then that translates into how far you’re allowed to go.  I’m still not sure how one knows what the appropriate amount to select is, but the station agent helped us figure it out this time.  Each time you have to change subway lines, you have to put your ticket back into the machine and add some more money to it.  Somehow it all magically works out in the end, but I’m not sure how anybody manages to navigate the system without help.  The ticket machines have dozens of buttons, but I’ve only needed to push 2 or 3 of them, and I hope it stays that way.

After arriving at Tokyo station, we met Kayo-san at our meeting point and headed over to the Imperial Palace grounds.  We wandered around for a while and looked at the koi swimming in the moat, taking pictures of everything.  As we were walking, a man overheard us talking and came over to introduce himself.  It turns out he is an English teacher in a small village north of Tokyo, so he takes every opportunity to refine his English skills.  We had a nice chat with him for about an hour, and then we had to say goodbye to Nozaki-san and get back to our palace visit.  Most of the inner palace was burned down, but the outer walls and guardhouses are still in place, and the grounds are open for visitors.  They tell me that the emperor actually still lives here somewhere, but the grounds are so vast that we didn’t have any hint of where that might be.

Around 2pm, we left the palace and went to find some lunch.  We took the subway again, and would have been hopelessly lost without Kayo-san to help us buy the right tickets.  Even with her help, we still had to ask a station agent for a hint.  Apparently the system is so complicated that even native Tokyo residents don’t know everything about it!  Having gotten everything straightened out, we went to Ryogoku.  We walked over to the coliseum and tried to buy tickets for today’s sumo match, but we had arrived too late and it was sold out.  Apparently it was the end of the season, so it was a very popular day to come.  We didn’t get to see the match, but after we came out of the izakaya (like a pub), we did see the winning wrestler strutting over to his victory celebration.

Now that we were full of tasty Japanese food, we visited the Tokyo Edo museum.  The museum is full of an interesting mix of actual preserved artifacts and scale model reconstructions.  The people have spent an amazing amount of effort building these tiny models, and luckily visitors are allowed to take pictures of them, so we documented the museum quite thoroughly.  It takes about 2 hours to go through the museum, starting from the 1600s and finishing at the late 20th century.  It was coming up on closing time as we finished, so we left the museum and headed back to the hotel. 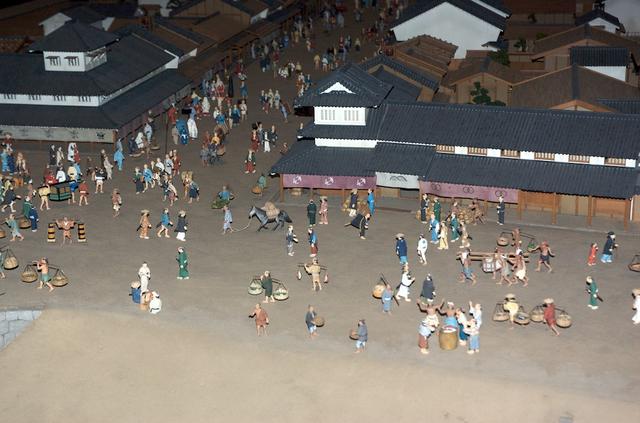 Somehow the train back to the hotel involved 2 less transfers than the train from the hotel.  Confusing?  Yes.  Explainable?  No.  Regardless, we arrived safely and discovered that our suitcases had arrived.  Oh, welcome clean clothes!  In Narita, we had sent our suitcases ahead with the hotel so that we wouldn’t have to deal with trying to bring them on the train, but it turns out this isn’t the most timely way to move luggage around.  Based on the tags stuck on the luggage, I suspect that they in fact just mailed them in the regular postal mail.  If so, that’s a remarkably inexpensive way to mail things compared to the USPS.  Now that our clothes had arrived safe and sound, we cleaned up and changed.

It was about 7:30 by this point, so we decided it was time for dinner.  Kayo-san thought there was a good pub nearby, so we set out to find it.  As we walked out the front door, she pointed across the street and said, “Oh, there it is!”  Richard and I had looked at that building several times, but we would have never realized it was a place to eat without help.  Illiteracy strikes again!  We walked over and went up to the restaurant.  This was a more traditional place, so we were expected to leave our shoes at the front door.  Eating out with no shoes on was a new experience for me. The food was again tasty, and we supplemented it with plenty of sake  and shochu (distilled liquor similar to vodka, but easier to drink).  We left the restaurant around 10:30 and sent Kayo-san on her way back home, then we went back to the hotel and went directly to sleep.