The weather was looking rainy in Kyoto when we woke up, but we decided to go sightseeing anyway.  We took the bus to Kinkakuji without too much difficulty.  At first, we had some trouble figuring out what the fare should be, but then we realized busses in Kyoto charge a flat ¥220 regardless of distance or route.  Now that we understand that, the ¥500 unlimited day pass would have started looking pretty good for a whole day of rides.  We arrived at the temple as it was starting to drizzle, so Richard bought an umbrella for ¥400.  The temple is known as the Golden Pavilion because it’s covered with gold leaf, but since it was a cloudy day, it wasn’t as impressive as it might have been.  In addition to the main building, the grounds are very nice, with ponds and trees and nice plant arrangements.  At the end, there is an entire marketplace set up to steal tourists’ money.  Nevertheless, some of the items were pretty nice, so we bought souvenirs like everyone else. 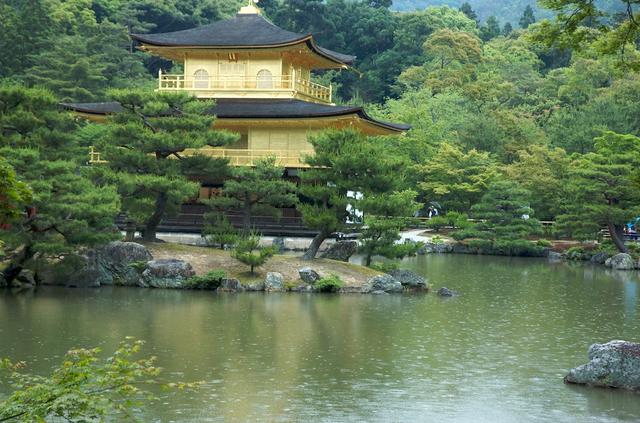 By the time we finished at Kinkakuji, it was really raining, so we decide that an indoor activity was called for.  We had noticed that the museum of Kyoto was directly behind our hotel, so we headed over to check it out.  Once we got inside, it turned out they had a volunteer English-speaking guide to take us through the exhibits.  We had a nice chat with her and saw lots of Kyoto history.

After the museum, we headed over to the train station and went to Osaka.  The ride is less than 30 minutes even without taking the shinkansen, and the train was empty, so that gave us a nice rest.  We arrived in Osaka, managed to successfully change stations and take the correct subway to the correct stop, and found the hotel with only a few minutes of wandering. I guess all this practice at getting around must be helping.

We got checked in and freshened up, and then Rob and Jamie had found a baseball game, so we headed over to try and get tickets.  Richard decided to stay behind and rest his back, so there were just three of us.  Baseball is extremely popular here, so the games are often sold out, but since it was a weeknight and the weather was a little rainy, the stadium wasn’t quite full.  We managed to buy three tickets for under ¥6000.  Imagine walking up to a major-league baseball game ten minutes before it starts and buying tickets for about \$20 each!

Japanese baseball is very different from going to an American game.  The game itself is about the same, but the crowd is continually excited.  Every player has a little song and when they come up to bat, the entire stadium chants their song.  When the opposing team is at bat, everybody gets quiet except the tiny section of visiting fans, who sing their team’s songs.  The game we watched was the Tigers versus the Lions, and we were cheering for the Tigers (since they were the home team).  We lost, 6-4, but it was exciting right up until the very end.  After that, we and 40000 other people made our way back to the train station and crammed in.  Actually, considering how many people were leaving, it was very orderly and moved along quite rapidly.  It took less than an hour to get back to the hotel from the time the game ended.  It was late by then, so we went straight to bed.

Today the weather is looking a little better.  We’re doing laundry and plan to head down to the marina and harbor later this morning.  This afternoon we are meeting Richard’s Japanese friend Yuki.  I don’t know what he has planned for us, but it’s sure to be exciting.